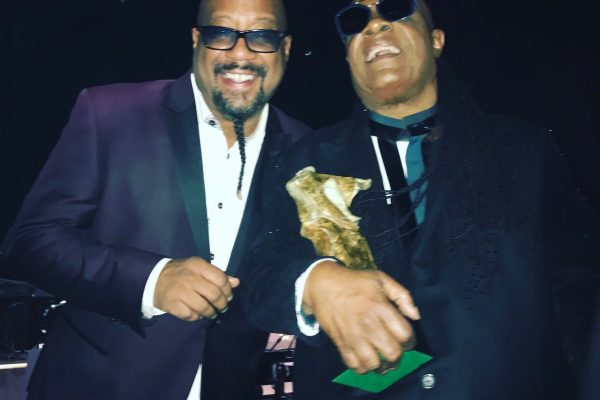 Michael Ruggieri pulled out all the stops for the important piano and organ solo in the EW theme song when he book Herman Jackson. Herman of course nailed the style and solo for the theme song which you can hear now:

Herman Jackson is a Grammy Nominated  Producer, Composer, Arranger, Musician and a UCLA Instructor. He has toured and recorded with Whitney Houston, Stevie Wonder, Quincy Jones, Aretha Franklin, Gladys Knight, Roger Daltrey, BeBe Winans, Jeffrey Osborne, Joe Cocker, The Temptations, Patti Austin, Calloway, and George Benson. He has arranged and conducted the San Francisco, Houston, & El Paso Symphonies, The Cleveland Orchestra, The Fort Wayne Philharmonic and The National Symphony. He has worked as a Musician and Arranger for The Tonight Show, American Idol, America’s Got Talent, Don’t Forget The Lyrics, VH1 Divas, The American Music Awards, the TV Land Awards, A Home For The Holidays, & The NAACP Image Awards. In 2003 Herman Provided Piano  and Synths to the Grammy  Record of the Year Winner “Speakerboxx/The Love Below” by the Hip-Hop Duo Outkast.

He worked as Producer/Arranger/Musician on all of Grammy winner Norman Browns CD’s including the groundbreaking 1994 “After The Storm”.  Herman Jackson served as Music Director of the 2008 Papal Mass at Yankee Stadium and he performed at the White House for Presidents Bush and Obama. He performed the National Anthem at the Super Bowl with Beyonce & Jennifer Hudson. He has performed on the Grammy Awards with Stevie Wonder, Aretha Franklin, Whitney Houston, Kid Rock, Keely Smith, Chris Brown, Cristina Aquilera, Yolanda Adams, Florence Welch, Martina McBride and Lionel Richie. He has done television Appearances with Smokey Robinson, Yolanda Adams, Rod Stewart, Andrea Bocelli, Joe Cocker, Kelly Clarkson, Chaka Khan, John Legend, Robin Thicke and many others. His new class at UCLA “Arranging for Independent Artists and Music Producers” has been well received and loved by his students.

The Pith Ball and the force that QM ignores

Bob de Hilster, your particle model guru, explains the pith ball using TPM. Further, he shows that TPM is already unified. FOR THOSE NEW TO THE PARTICLE MODEL: The Particle Model Overview: http://first.particle.guru Levels of the Universe: http://second.particle.guru

Bob de Hilster, your particle model guru, shows that a compass needle alone does not prove there is a magnetic field. FOR THOSE NEW TO THE PARTICLE MODEL: The Particle Model Overview: http://first.particle.guru Levels of the Universe: http://second.particle.guru

Bob de Hilster, your particle model guru asks: Does the battery store charge or is there a magnetic field around a battery? FOR THOSE NEW TO THE PARTICLE MODEL: The Particle Model Overview: http://first.particle.guru Levels of the Universe: http://second.particle.guru